Writing in the Daily Telegraph, Roger Bootle argues that the EU has been failing economically over the past few decades. It has underperformed most major developed countries and seen its share of world GDP fall continuously. Despite this, European leaders insist that the EU has been an unqualified economic and political success.

However, Brexit is likely to prove the opposite and as a result Brussels will try everything it can to nullify the threat it poses.

He argues that one way the Eu will try to frustrate Brexit is by dragging its feet over doing a deal.

Mr Bootle writes: “If the EU’s leaders see Brexit as a threat their response will be to try to nullify it.

“One of the EU’s tactics in negotiations will be to rely on the ticking clock.

“Already a number of EU figures are saying that a trade deal by the end of the year is impossible.”

He adds: “This is pure political posturing.

One strategy being considered by Brussels and the UK is to negotiate a new trading relationship in stages.

JUST IN: Boris Johnson DEFEATED in the Lords as changes to Brexit bill demanded

The European priority would be to conclude a deal before the year’s end for the tariff-free trade of goods, as the EU enjoys a massive trade surplus with the UK in this sector.

He says: “Time and again it has been made clear that the EU establishment thinks that exports are good and imports are bad.

“Accordingly, securing tariff-free access to the UK market is a great prize, whereas allowing EU consumers to benefit from British-produced goods and services is a concession that may need to be made but is best avoided.” 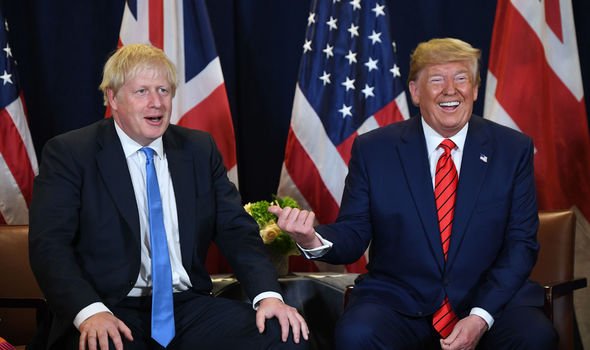 To gain leverage in negotiations with the EU, the economic expert urges the British Government to conclude a trade deal with Donald Trump’s America as quickly as possible.

He argues that if the UK can replace European products with American ones, then Europe’s leaders will have greater incentive to do a deal.

He explains: “But if we reach a deal with America, leading us to reduce or even abolish tariffs on imports from America, then the pressure on European producers will be even greater.

Consequently, European businesses will put pressure on their governments to ensure a trade deal is reached, even if only limited to the trade in goods.

Mr Bootle offers a diagnosis as to why economic growth in the EU has been so sclerotic.

His answer lies in the protectionist policies of an ever expanding bloc, that seeks to shield European businesses from the salutary effects of healthy competition.

For years the EU has argued that there is “no alternative” to its economic model, but the economic expert insists that Brexit will show that there is one.

In conclusion, he writes: “Provided that we do not cave in and accept regulatory alignment with the EU, once we have overcome the initial dislocations, I expect to see the UK decidedly outperforming its former partners in the EU.” A populist government will be sworn into power in Italy on Friday after president Sergio Mattarella agreed to a revised slate of ministers – just days... Facebook has found no further evidence of Russian propaganda activity around the EU referendum, after being forced by MPs to carry out a more detailed... The best film! Of all the awards, this is the one most drenched in glory – and hubris. It comes at the end of...
© Copyright 2018 - British Daily News 24 - Web Powered by Axema